Samsung’s Galaxy S21 smartphone lineup is set to be released in 2021, and a new video shared on YouTube compares an alleged Samsung Galaxy S21+ with an iPhone 12 Pro.

The back of the iPhone 12 Pro features precision-milled matte glass, while the back of the alleged Galaxy S21+ seems to be constructed from a plastic-like material. Additionally, the three distinct cameras of the Galaxy S21+ appear to be arranged vertically, whereas the cameras of the iPhone 12 Pro are arranged in a triangular-shaped array. The individual cameras themselves look to be approximately the same size in both smartphones.

On the front of the Galaxy S21+, the bezels seem to have decreased in size. Similar to the current Galaxy S20 lineup, the smartphone appears to maintain the current hole-punch selfie camera centered in the top portion of the display. 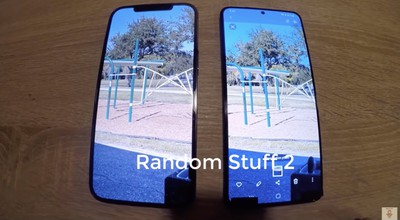 Another difference between the two smartphones will be their respective chips, as Apple has fitted the latest iPhone 12 models with its own A14 Bionic chip. Samsung is rumored to use Qualcomm’s Snapdragon 888 and Exynos 2100 chips in its new smartphones depending on the region, according to PhoneArena.